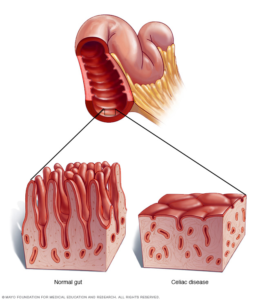 Celiac disease is on the rise, but this genetic disorder is still widely misunderstood. It’s most famous for giving rise to the gluten-free trend, but celiac disease isn’t just a faddish health issue – it’s a serious disorder that can damage your digestive system. Would you recognize the symptoms of celiac disease if you developed them? Keep reading for six facts about this increasingly common disease.

Celiac disease is triggered by the consumption of gluten. When someone with this disorder eats foods made with wheat, rye, or barley, the gluten in these foods causes the immune system to attack the healthy cells of the small intestine. Over time, this inflames the intestines and damages the villi, the small hair-like structures lining the small intestine which are responsible for absorbing nutrients. Due to this intestinal damage, someone with celiac disease may suffer from malabsorption and nutrient deficiencies, no matter how much they eat.

You can’t catch celiac disease from someone who has it – but if you’ve got the right genes, you have a higher risk of developing it. Celiac disease tends to run in families, and if one of your first-degree relatives – a parent, sibling, or child – has the disorder, you have a five to ten percent chance of having it, too. Genetic testing can reveal whether you have the genes that are associated with celiac disease.

People with celiac disease are doubly at risk for not getting the nutrients they need to be healthy. If their disease goes untreated, it can cause malabsorption – so no matter how many calories are consumed or how nutrient-dense the food is, the body can’t absorb it. Many children who have celiac disease don’t grow normally and experience delayed puberty due to malabsorption.

People with celiac disease are still at risk even after adopting a gluten-free diet that eases their symptoms. Many foods that contain gluten are rich in essential nutrients, and avoiding them can mean not getting enough dietary fiber, B vitamins, and iron. The bottom line is that if you’ve got celiac disease, it’s important for you to be especially careful about tracking your nutrients.

Wheat contains thousands of different proteins, including gluten. Someone with a wheat allergy has an immune response to one of the many non-gluten proteins in wheat. If you have a wheat allergy, you can still eat grains like rye and barley, which contain gluten, without any ill effects.

Most of the time, adopting a completely gluten-free diet can repair the intestinal damage done by celiac disease. Without any gluten to trigger an immune response, the body can heal itself and the intestines can start working properly again. People with celiac disease must stick to a gluten-free diet for the rest of their lives, but most consider it a small price to pay for maintaining a healthy digestive system – especially since there are plenty of delicious gluten-free foods on the market today.

Celiac disease can have severe consequences if left untreated. Luckily, though, with a nutritious gluten-free diet, the disorder is simple to keep in check, and most people make a full recovery from their symptoms. If you think you might have celiac disease, see a doctor for a diagnosis. A medical professional can help you find ways to manage your condition.